It was a perfect Sunday afternoon in March. That’s the best month out of the year in South Florida. It’s always perfect 70-80° weather and hardly any humidity. We decided to hop on 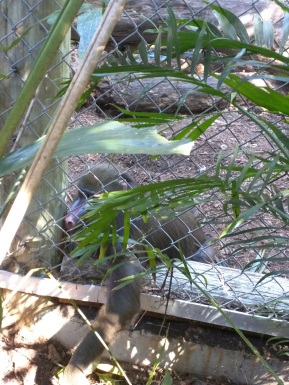 the Harley and just ride south. I think I was a little grumpy that day. I can’t recall exactly what happened but I believe we were supposed to do something else and I was disappointed we didn’t go.

I guess I will never know if Robert planned it but we just so happened to stumble across this place called Monkey Jungle. We parked the bike, he looked at me and his face just said “Really? Did you really think I wasn’t going to take you someplace fun?” Of course I remained silent for a bit because of my pride. I heard funny noises in the distance and saw signs as we walked toward the entrance saying it was mating season. “How gross” I thought “but this is going to be funny!” I immediately changed my tune.

Mr. Frank DuMond spent over 5 years collecting different species of plants, trees and palms from the Amazon rain forest in South America. Most of the plants collected came from within a 100-mile radius of Iquitos, Peru.

Read more of their story here

We had a lot of fun here. In fact so much fun I didn’t want to miss anything by pulling out the phone for a picture. That’s why we hardly have any visuals on this post. The price wasn’t to bad considering we spent several hours there.

You can get a coupon here

The spider monkeys were hilarious. Remember I said it was mating season so you can picture that cage how you wish. We also saw orangutans, a gorilla, java macaques. The 3 monkeys that were not caged were the squirrel monkeys, black-capped capuchins and howler monkeys. They live in a 7-acre forest of somewhat of a natural habitat.

There was also a section of birds and a couple of really old iguanas. We were able to feed pretty much any animal there with food you buy at the entrance. That was my favorite part.

See you on our next adventure!

Here is a couple photos we did manage to take…

– Sailboats of the New River

– How to Buy a Sailboat

Want to join us in exciting adventures?  Sign up for our newsletters.

Installed a new @furrion air conditioner in the travel trailer 🥶 Love how sleep it looks compared to the old one...whole 10 db lower too 👂
It's this little girl's first time on the sailboat ⛵️ 🐶 She made herself comfortable real quick!
Look at this massive egg that was laid this morning 🥚
It was a crisp 40° this morning, now we’re warming up with some coffee at the @huddlehouse ☕️
😝 Happy Valentine's Day y'all! 💘
Volunteering at the fiddler Crab Festival in Steinhatchee Florida 🦀
Loading Comments...
Comment
×
%d bloggers like this: